LESSONS FROM THE SWISS REFERENDUM ON SOVEREIGN MONEY 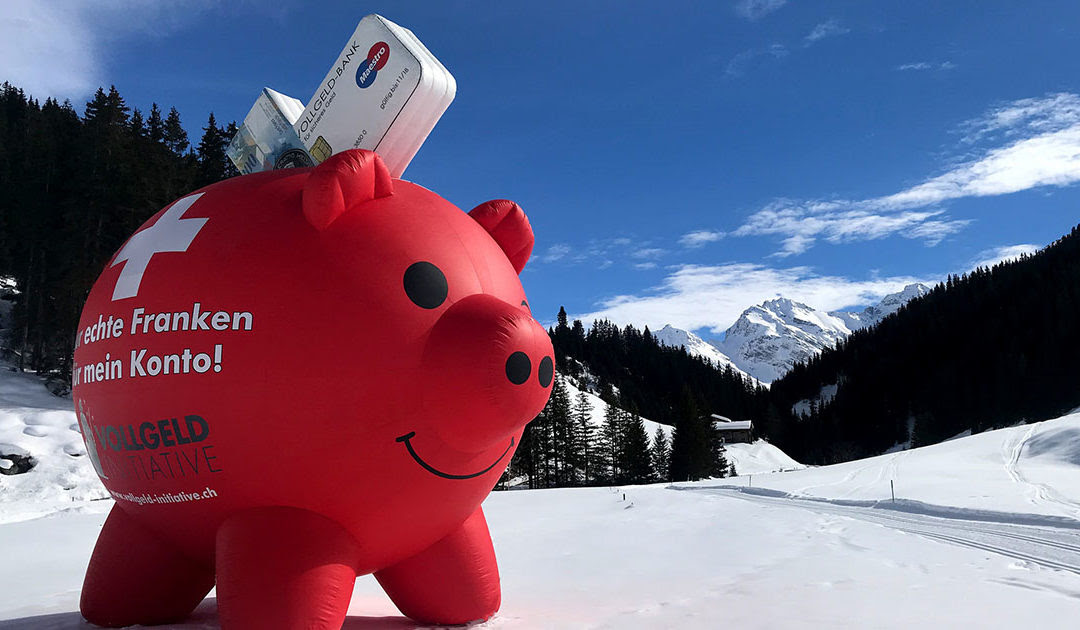 One month ago, the Swiss population rejected by referendum a proposal to introduce a sovereign money system. What can we learn from the campaign in Switzerland? Here are takeaways from the debate event we hosted on June 27 in Brussels with Vollgeld’s spokesperson Maurizio Degiacomi and asset manager Michael Malquarti.
On June 10th, 2018 75% of Swiss voters rejected the Vollgeld (“full money”) initiative which proposed a radical reform of Switzerland’s banking and monetary system.
In essence, a Vollgeld system would do three things:
Despite the negative outcome of the Swiss referendum, one must salute and pay tribute to the organizers for having created such  strong media attention and intellectual discussion about the way the money system works. This is a truly unprecedented success, which marks a new milestone since the founding of the Positive Money in 2010 and the International Movement for Monetary Reform (IMMR) in 2013.
Many lessons can be drawn from this unique experience for our movement and this is why we organised a debate in Brussels to look back at what happened. We were delighted to welcome two excellent speakers who came directly from Switzerland to witness and discuss how the campaign happened and why it failed.

One of the most shocking realisations from the Swiss referendum was the level of confusion that arose from the public debate. The low turnout (34%) probably reflects this confusion. ‘When the Vollgeld campaigns says one thing and the the government or the central bank says the other, people are just confused and do not know what to think, and even less how to vote.” Maurizio Degiacomi said.
Although the Swiss did not approve the Vollgeld proposal, a pollhad found that around 59% of Swiss people actually do want the central bank to have the monopoly on money creation. Hence, the result of the vote should not be interpreted as support for the current monetary system where private banks create most of the money.
On several occasions, the Vollgeld campaign had to fight back against misleading statements by the media and opponents of the initiative. For instance, the Federal government  put forward misleading claims such as that “Banks can lend money … by using the money that customers have deposited into their bank account” or that under a sovereign money system, a central bank would have to lend money directly into the economy. Those two claims alone go right in the opposite direction of what the Vollgeld initiative is about, and rightfully, some supporters of Vollgeld have brought a legal complaint to the Federal supreme court. The case is currently pending.
The process of making  technical topic like this mainstream is a difficult one, especially given the lack of education that is being provided. More education is required to ensure that people understand how the money they use everyday is actually being created.
In spite of the confusion, overall the initiative has contributed to increasing the level of awareness about money creation in Switzerland but more importantly abroad. This is in itself a huge victory for the campaign, even though it didn’t help the campaign immediately.

Central bankers cherish their independence and are usually proud to cast themselves as bureaucrats who do not engage in politics. However it appeared during the referendum campaign that the Swiss National Bank did exactly the opposite, by clearly campaigning against Vollgeld.
Thomas Jordan, the head of the SNB loudly spoke against Vollgeld in several speeches and media interventions. Shortly after the preliminary results came out, the SNB issued a press statementexpressing its relief that Vollgeld was turned down by the Swiss people. Paradoxically, Jordan’s argument against Vollgeld is that it would politicize monetary policy, but the very act of campaigning against Vollgeld has resulted in a politicization of the SNB.
Given the authority of the central bank, the SNB’s role created an enormous difficulty for the pro-Vollgeld campaign. “In fact the banks themselves did not need to campaign because the central bank was in the frontrun of the campaign against us”. Maurizio Degiacomi told us. How do you convince people to vote for Vollgeld if the very institution supposed to implement the reform is so clearly against it? It was probably an impossible task.
The proactive political role of the SNB during this campaign is quite extraordinary and goes beyond the usual tradition of central bank independence. Did it go too far?
On the one hand, the SNB is primarily concerned with the topic of the campaign, so it has a legitimate stake and expertise in the debate. On the other hand, Malquarti thinks the problem is not so much that the SNB took a position, but that they usually pretend to be neutral when in fact they are not. “When you hold power, you are never neutral” he said. “We should simply recognise that being the head of the central bank is de facto a political position.”
Overall, the Swiss experience provides another living example that the central bank independence will be increasingly challenged as the discussion over money creation goes mainstream and becomes politicized.

Members of ‘Modernising Money’ (MoMo), the asociation behind the Vollgeld initiative.

Despite the confused discussion, the debate in Switzerland has brought up some serious challenges against the sovereign money proposal. One of the main objections was the fact that Vollgeld would greatly reduce the possibility of the banking sector to extend loans to the real economy, ultimately provoking an economic downturn.
This objection isn’t new to Positive Money. In 2015, we published a full paper dedicated to addressing this question. While we think the objection doesn’t stand in theory, in practice we have to recognise the challenges of the transition and the fact that moving to a sovereign money system would induce a behavioral change from bank’s customers. Put simply, people would have to voluntarily move their savings from sight deposits towards time deposits or mutual funds in order to make their savings available for lending to businesses.
This induces a cultural change in society on how we manage our money This assumption should not be taken lightly.

Despite the defeat, Malquarti thinks the outcome of the referendum does not mean people endorse the status quo. It was only a rejection of one specific proposal which was “too abstract, too vague and to some extent it was disconnected with the political realities.”
Hence Michael Malquarti’s biggest critique of the Vollgeld initiative is that it focused “a proposal that came out of the blue, without prior consultation with the current political establishment”. This goes against the Swiss tradition of popular initiatives, which often stem from political parties themselves.
Malquarti’s suggested the way to go would be narrow the proposals on how to reform the monetary system. For example “Helicopter money” or using QE for financing infrastructure investments are workable solutions to cope with recessions. Issuing a central bank digital currency and offering the public current accounts at the central bank is also one way to make the financial system more stable and improve the efficiency of monetary policy. Those ideas do not require a full-fledged sovereign money system, yet they would move society closer to it.
Positive Money was founded in the UK in 2010 with the historic purpose of advocating for a “sovereign money system”. However over the years we have realised that such a change is unlikely to come out of an overnight revolution. Switzerland’s experience provides ample evidence that system change cannot happen in one go! We must think about the different layers of change, from education to customer behaviors and also a cultural shift within central bank’s and the financial sector.
While we remain committed to demonstrating the intellectual and theoretical validity of a sovereign money system, Positive Money Europe’s short-term priority isn’t so much to ban private money creation but to create a hybrid system where public money creation can be mobilized to compensate for the pitfalls and dangers of the privately controlled money creation system. This is especially true in the Eurozone where the European Central Bank is prohibited from doing monetary financing: this effectively prevents the ECB from using its most powerful tool.
Ultimately, we also realised that our mission goes beyond the implementation of one single proposal such as sovereign money. Our mission is to create a money and banking system that serves a fair, democratic and sustainable economy. To fulfill this ambitious mission, we will probably need more ammunition than just one silver bullet.
You can watch the full debate below: