Banksters, give it back

Banksters, give it back

Yes to robots & the two popular swiss Initiatives coping with them ! We can imagine all things produced by robots, leaving humans without nearly any incomes. Then, we all need  a framework that measures the gap in the present system between costs and too low incomes and then to issue personal debt-free money to solve this  gap. Money safe from finance crises: Only the Swiss national, cantonal or communals banks can create money. Yes to real Swiss Francs  in  bank accounts. Yes to what people want: closing a loophole in the law. Yes to billions for taxpayers and the real economy. The effect of the Swiss sovereign money initiative is what the majority of people would like, and is also what the majority of people think we have today: • Only the Swiss national, cantonal or communals banks are allowed to create our swiss money – not only coins and bank notes, but also the swiss electronic money in our bank accounts • The board of directors is randomly selected from the pool of shareholders and dissolved, yearly.  Since the board is actually running the NCO, we cut out the need to audit.  However, the board coming in the next year will be responsible for auditing the previous year’s board and holding them accountable. Other banks can create other kind of private money, like the bank wir, www.wir.ch and are responsible for payment transactions, wealth management and credit brokerage in all kind of money. However, they can’t create anymore their own “swiss”money, abusing the brand swiss as now. What is sovereign money? Sovereign money is full-value legal tender, which is brought into circulation by the Swiss Public Banks. Today, only coins and bank notes are sovereign money. What is electronic money? It’s the numbers we have in our bank account. At the moment it isn’t legal tender, it’s only a promise made by a bank to pay us cash when requested. The Swiss Sovereign Money Initiative has the aim that only the Swiss Public banks will be allowed to create electronic money, as is the case for coins and bank notes today. Electronic money will become sovereign money, a full-value legal tender. This is necessary as, at the moment, cash only accounts for 10% of the money supply in circulation in Switzerland; 90% is electronic money. The Swiss people voted in 1891 to forbid the banks from printing swiss bank notes. We now have to extend this and give the Swiss Public banks the job of creating the electronic money as well. Sovereign money benefits all bank customers, the real economy, the State, the Cantons, taxpayers and traditional banking businesses. Please, return to  Family de Siebenthal, av. Dapples 23, CH 1006 LAUSANNE Tél. intern ++ 41 21 616 88 88. In Switzerland 021 616 88 88 contacts: info@familiaplus.com  www.familiaplus.com 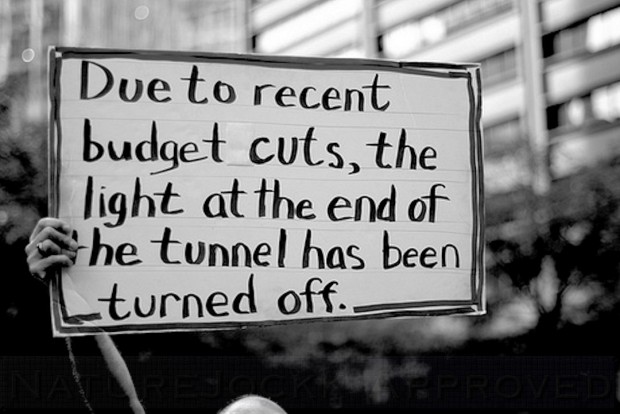 Yes to abundance, to generosity, to presents, gifts... No to austerity, to cuts, to greed, to stupidity...

Switzerland will hold a vote on whether to introduce a basic income for all since conception, in a further sign of growing public activism over pay inequality since the financial crisis.

A grassroots committee is calling for all adults in Switzerland to receive an unconditional income of $2,800 per month from the state, with the aim of providing a financial safety net for the population.


The new money is not coming from taxes or salaries but from the money creation actually given to the bankers by billions or even quadrillions...
These quantative easings are to be given to the people, not for wars or bonuses for the happy fews...Swiss Open Society to a real economical democracy, let's distribute the incomes from more and more automation, thanks to robots, computers and machines.
A new society, animals are free, it's our turn, let's free human beings from the chains of serfdom.

Automation will benefit to all. Let's share the massive productivity, a dividend for all swiss peoples, habitants of all the States of the Swiss Confederation, a real economical democracy, thanks to robots, computers and machines, animals are free, it's our turn, let's free human beings from the chains of serfdom.
We, swiss, are all Kings, and the first duty of a King is to control the money creation, 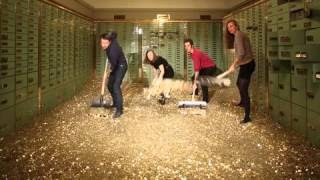 Switzerland is set to vote on whether to introduce a basic income for all adults after a grassroots group submitted more than the 100,000 signatures needed to call a referendu… 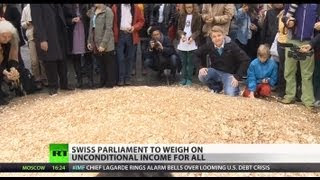 Cash Bern: Swiss may grant unconditional income for all

Swiss citizens are demanding a crucial change in the constitution, pushing for the introduction of a guaranteed income for everyone. RT teamed up with RUPTLY video to follo…