The leader of the Roman Catholic Church in England and Wales has declared that capitalism is dead because of the credit crunch. 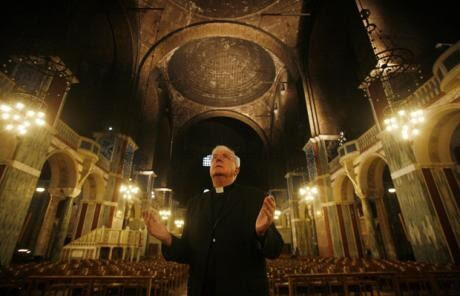 The Cardinal has set up a £3 million appeal for Westminster Cathedral which he fears will be forced to close within a decade if cash is not found for urgent repairs
Photo: HEATHCLIFF O'MALLEY

Cardinal Cormac Murphy O'Connor, 76, made the astonishing claim at a lavish fund-raising dinner at Claridges which secured pledges of hundreds of thousands of pounds for the catholic church.

The Cardinal, dressed in his full clerical regalia, said in a speech at the black tie dinner that he had worried whether the dinner should go ahead because of the troubled economic times.

The remarks will cause dismay in Downing Street as the Cardinal's remarks will be interpreted as a signal that the entire economic order has collapsed.

The Government has clashed with the Cardinal before over homosexual adoption, abortion and the Embryology Bill. One Whitehall source said: "We would like the church to work with us, not against us."

The remark caused astonishment in the ballroom, where the dinner was held, to launch an £8 million Faith in the Future appeal for money for the work of the bishops in England and Wales.

One guest who was present, who declined to be named, said: "I could hardly believe my ears. The Cardinal announced that, in his view, that Communism had died in 1989 and capitalism had died in 2008 because of the credit crisis.

"His remarks were part of a carefully considered thesis that it was capitalism that had got us into this mess and had died because of it. It was not just remarkable that he thinks that but it was remarkable that he said it in a room packed with some of the richest and most influential catholics in the land. Those same capitalists pledged a six figure sum to the church appeal."

The four course dinner, with a champagne reception, had been provided free of charge by Derek Quinlan, the property developer, who owns Claridges who is worth an estimated £60 million.

Sir Rocco Forte, the hotelier and prominent Roman Catholic, was in charge of the decoration. He decked out the ballroom in red flowers and red lights to match the Cardinal's clerical outfit.

Nicola Benedetti, the violinist, serenaded the guests and Julie Etchingham, the presenter of the ITV News at 10, compèred the proceedings.

Last month the Cardinal, 76, issued a statement on the economic crisis which said: "Religious leaders are not normally economists, however, they cannot ignore the damaging human consequences of the rise and fall of economic indicators. Behind the gloomy headlines are cities, neighbourhoods, families, individuals deeply affected by the economic breakdown; and the hardest hit will be the poor: those already struggling to survive. Christians have a paramount concern for the poor. This "preferential option for the poor" is a constant theme in Catholic social teaching".

A sopokesman for the Cardinal said: "They were private remarks at a private dinner."

The Cardinal has also set up a £3 million appeal for Westminster Cathedral which he fears will be forced to close within a decade if cash is not found for urgent repairs.

Parts of the building, which opened in 1903 but has never been completed, are in danger of structural collapse. The cathedral is recognised as one of the finest examples of Victorian architecture and Byzantine art.

The remarks by the Cardinal come as leading bishops in the Church of England have launched a withering attack on the Government, questioning the morality of its policies.

Five of the Church's most senior figures said the Government now presided over a country suffering from family breakdown, an unhealthy reliance on debt and a growing divide between rich and poor.

The Rt Rev Nigel McCulloch, the Bishop of Manchester, accused Labour of being "beguiled by money'' and "morally corrupt''. He said: "The Government believes that money can answer all of the problems and has encouraged greed and a love of money that the Bible says is the root of all evil. It is morally corrupt because it encourages people to get into a lifestyle of believing they can always get what they want.''

The Rt Rev Tom Wright, the Bishop of Durham, said: "Labour made a lot of promises, but a lot of them have vanished into thin air,'' he said. "We have not seen a raising of aspirations in the last 13 years, but instead there is a sense of hopelessness.

"When a big bank or car company goes bankrupt, it gets bailed out, but no one seems to be bailing out the ordinary people who are losing their jobs and seeing their savings diminished.''

The bishops of Hulme, Winchester and Carlisle joined in the attacks.

Kucinich "...the manipulation of the Federal Reserve!"

From Debt to Prosperity

The booklet that caused Louis Even
to understand Social Credit

It is this booklet that changed the course of the life of Louis Even and made him a Social Crediter in 1934. "It was a great light on my path," Louis Even said. This 112-page booklet could change your life too! Order it now! The pricfe is $? by mail (Canada and U,S,A,), and $10 international.

To download the PDF version of this book, click here (or on the picture of the cover of the book) (1,2 Mb)

and viewed in the light of the social doctrine of the Church; a study prepared by Alain Pilote on the occasion of the week of study that followed the Congress of the Pilgrims of Saint Michael in Rougemont, September 5-11, 2006.

The Social Credit idea may raise many questions among our new readers, and one article is certainly not enough to answer all these questions, or to give a clear understanding of the whole concept of Social Credit. Besides, most people simply do not have the time to read long books on the subject. So, here is the solution: the Social Credit proposals explained in 10 lessons, each one being the logical continuation of the previous one.

In This Age of Plenty

All those who appreciate Louis Even's writings on Social Credit will make it their duty to get this book, a masterpiece of logics and clarity. To the new readers of "Michael", we strongly recommend this book, which gives, in a simple but brilliant way, the best possible explanations on the new conception of economics that Social Credit represents. You can find on line on this site the complete book (50 chapters plus appendices).

Hi Stephen,
Thanks for this.  Some strong statements!
There are many moves in the pipeline here in the UK, many of which will seek to include the religions/faith-based organisations.
The Cardinal's reference to the Catholic social teaching means he might also be aware of the Scholastics treatment of usury.
However, when media-quoted people say (or are reported to say) that there is an 'over-reliance on debt', that seems to show that they don't understand that all of our current money supply (except coinage, 0.1%, and perhaps some Treasury-issued money) is presently dependent on debt in some way - so presently, the only way to have more money is to have more debt, and the only way to have less debt is to have less money, but the outstanding amount of debt will still always be more than the available money supply, at whatever level.  It seems a short-sharp-shock-education process, or event, needs to happen to spread a very simple message on this basic point to these media-quoted people very quickly, so that they stop repeating nonsense, which only reinforces myths, and start repeating sense, which reinforces the truth.
In the UK television news this evening they were discussing 'quantitative easing' and explained with graphics that the Bank of England "can create money" to buy the toxic assets of banks - they did not say why this might be neccessary, or what happens to those 'relieved' toxic assets, or what the banks can do with the cash they are swapped for, but at least it gets out in the open what seems to be a major stumbling block for many people, the fact that money is created in the first place.  Hopefully some viewers tonight will be wondering: "If they can create money to buy junk from banks, why don't they create money to do some good stuff?"
I guess we just have to keep distilling our message until it becomes flammable, catches alight and spreads like wild-fire!
I think we have to work together with all good-willed people to do this now - I can't wait for another 80 years or so (who can?).
Cheers,
Jamie.

Dear Jamie,
This represents progress in the religious area, for monetary reform. Perhaps we should encourage our Brit friends to make contact and spread monetary awareness among the rich catholic names in this article below.
Best,
Stephen Z.
AMI
http://www.telegraph.co.uk/news/newstopics/religion/4125339/Cardinal-says-credit-crisis-has-killed-capitalism.html

--
no fate but what we make

Please, send this message to all your friends now and the world is already better, thank you.
--
Admiration.
http://www.union-ch.com/file/portrait.wmv